skip to main | skip to sidebar

Catching my Breath: Part 5-"Coming Back from Space Travel"

My eyelids felt like they each weighed 50 pounds; I could hear voices around me and quickly id my wife, Heather's sort of coming from the left side of the bed but there was another female voice on the right side I did not recognize.....He got a very nice pair of lungs; one of the best I've seen in a long time. They were beautiful!

I immediately felt like I wanted to open my eyes and see this person's face but again it seemed virtually impossible. I decided to moan! MMMMMMMmmmmm 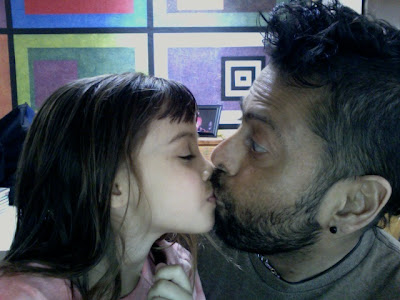 Heather asked me if I was Okay and I guess I must have said yes in some form. I had been out of surgery for quite some time but I was just barely regaining consciousness. At first, from what my friend Chris explained to me, I was connected to a respirator; a pretty large hose ran through my throat down to my diaphragm helping me to breath. For several hours after the surgery I was not quite ready to breath on my own so while I became stable and some of the anesthesia wore off I needed to be assisted in this way. Eventually the system was removed and everything was in the right place....and my body kicked into action. I guess soon after is when I found myself trying to open up my eyes. I felt so tired but at the same time I could tell that there was something different, that something had taken place and that I had gone somewhere and come back. Even though at this point there was still a cannula on my nostrils I could feel my breath going in and out without hesitation.....I felt I had been through a time machine and I was coming back from space travel. 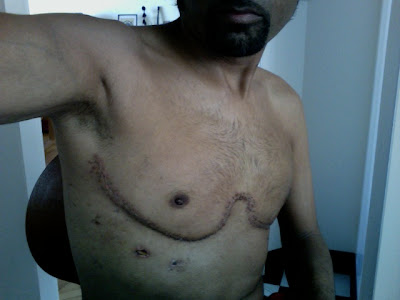 I could only imagine what had happened while I was gone; while I was out; traveling. It took nearly 9 hours from the moment I arrived at the operating table since I made it back. I refrained for trying to open my eyes and started to recreate in the best way I could a picture of the happenings. My gown removed, needles going in, fluids injected, my chest and arm pits shaved and cleaned with antiseptics to make my skin fully sterile and basically exposing it as an open canvas for scalples to trace a line of entry.

I was given a clam shell incision; probably about 25 inches across my chest. It is not a straight line and to be honest its quite a fancy cut. A small incision was also done to my sternum and finally my rib cage lifted to create the grand entrance for probably one the most complex surgeries around, a bi-lateral lung transplant. I'm not a doctor but I read enough about it and by the time I signed myself up for this, I knew this was no joke and that were anything to go wrong well then lot of things would've turned wrong. Everything came together as I had planned. I expected not less from myself, the preparation and all the stamina built up to this moment had been tested and yes I had run my ultimate race with unprecedented results. I was breathing again.

Taking the first few breaths after the doctor ordered the nurse to remove the cannula was an amazing experience. I clearly remember Dr. Hoops saying; " Why is he still on oxygen? I want him to start breathing completely on his own , this is overkill take it out."

Having been connected to an O2 concentrator for the past several months prior to this moment was something I was not psyched about; although I knew it was absolutely necessary for my survival I longed for this moment. There I was, back breathing like a normal person, like you're supposed to; getting oxygen wireless again!

I immediately felt an incredible surge of energy and my brain could not keep up with everything I was thinking about. When can I walk? When would I be able to sing again? How long before I'm out of here? When would I be back home to my family....I mean the list went on and on and on and the craziness of it all settled in more and more....Well kind of. I mean I don't even know that I can still completely fully understand. It is not that I don't know what happened but if I stop to think about it for a second, I am breathing through someone else's lungs; absolutely mind boggling and truly incredible.

I felt I was coming back from space traveling because it really felt I had gone beyond my own space. I had gone to a place where everything about myself had been meticulously deceptive. Who I was mentally, physically and emotionally and some how I felt revitalized, I felt somewhat like everything was new. I had been working mentally so much towards specific goals but now my mind felt different about everything; I could multitask; there was no need to think about one thing at a time I was just exploding and showering myself with ideas, scenarios and all kinds of different plans. My brain was fully oxygenated. My oxygen saturation levels were up and this made a world of difference and my body was kind of in shock but stocked.

I could see everyone's face in amazement of what had happened and how suddenly I was right back at my sarcastic punk ass self. I could see their smiles and I just knew...its gonna be alright. My wife could not stop looking at me and just go wow, my brother kept saying amazing just amazing and my friend Chris was like "Dude you are back"...all I could think of was I wanted to see my daughter Kaya and tell her what an awesome trip I had and that I was coming home soon with out oxygen. After all once you're back on earth from space traveling you don't need oxygen anymore.

Come back for Catching my Breath:Part 6- "Now What"
Posted by Rowan Jimenez at 2:52 PM

Hello Rowan,
Hope things are still going well with you. Just wanted you to know that you and your family are still in our thoughts and prayers
Monica Zelei

I have set up a fund through an organization called the National Transplant Assistance Fund to collect donations to pay for medical expenses not covered by my insurance. NTAF is a nonprofit organization that has been assisting the transplant community for over twenty years. All contributions are administered by NTAF exclusively for uninsured transplant-related expenses. Donations are tax-deductible to the full extent of the law.

To make a donation:

In Honor of Rowan Jimenez

If possible, we appreciate donations made by check, however, to make a credit card donation, please call NTAF at 800-642-8399 or visit my page on NTAF.

Rowan Jimenez
"Know first who you are; and then adorn yourself accordingly"- Epictetus